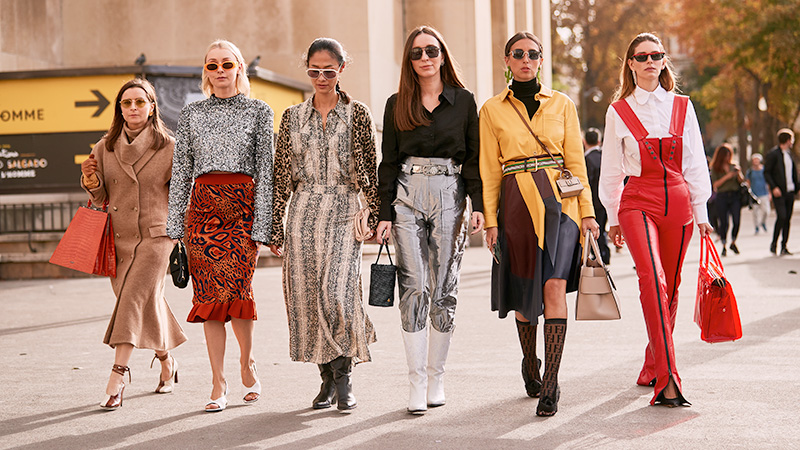 Street style is the grassroots beginning from where all fashion trends begin. It is defined by the unique expressions of individuals, not from the inside of the fashion industry, but from city streets across the world. Generally the domain of the young, street style is watched extremely closelyby those in the upper echelons of big fashion houses and publications.

With the individuality of the trendy youth in their sights, the fashion industry ploughs away at replicating those grassroots styles for the catwalk. From its co-option on the runways of Paris, London, New York, Tokyo, and Milan, street style undergoes trickle-down mass adoption.

High street fashion picks up the baton, diluting the catwalk street style-influenced looksinto a form to suit the average consumer.

At the bottom rung, the high street consumer takes their pick from the homeopathic distillation of the once-unique styles, until the next wave of watered-down fashion arrives in the next season’s range.

It’s a never-ending process of copying, copying and copying. By the time the style reaches the high street, the street style champions are disgusted by its mass adoption and have already moved on to something new. Mainstream consumer soon follow suit, dutifully moving on to the next season’s high street offering.

An excess of out-of-style inventory, unsold and unwanted, goes to waste. That which is purchased eventually ends up in charity shops, and - after years - into trendy vintage boutiques, further feeding the cycle.

The mass customisation movement has the potential to disrupt this cycle. The trickle-down dilution to the high street will be fragmented, and the excess of out-of-style goods will be eliminated.

Whilst the subcultures that give birth to street style will continue to stand at the forefront of fashion movements, the current prevailing route to mass adoption will be complicated.

Rather than picking and choosing from the diluted styles offered off the rack on the high street, adopting street style will be democratised, bringing the average consumer one step closer to choosing their own fashion fate.

The choice to become a street style icon will be easier, and the much desired status awarded to self-expression will be accessible to all.

The original street style initiators, however, do not work in this way. These are the radicals, for whom their unique style is central to their identity and how they shape their perspective of the world. These are not people who wish to follow trends. These are the people who seek to create them.

Even with the power to choose a customised version from a set of predefined choices through 3D rendering software on a company website will not appeal. These are choices which have already been studied and pre-packaged, always one-removed from the street style the original innovators have created.

The street style ambassadors, the creators of grassroots fashion, will never adopt the mass customisation model, simply because it is masscustomised, mass marketed. At their heart, the majority of these creators are would-be fashion designers. On some level, to digress slightly, 3D rendering technology gives them a vehicle to make their street style into their own grassroots fashion brand.

The customisation movement, epitomised by the introduction of digital 3D rendering technology, therefore has potential at both corporate manufacturing and grassroots level.

Product manufacturing, taking on new manufacturing models such as flow manufacturing, has the potential to revolutionise the way consumers purchase products, whilst eliminating financial and material waste from the production process.

At grassroots level, individuals can start small businesses offering customised products in line with their street style philosophy on a made-to-order basis that is more automated and streamlined than ever. Those Etsy crafters and designers could, potentially, scale up customisation of their products through the use of 3D rendering on their websites.

For the real radicals who would spurn the mass customisation movement to the same degree as mass production, marketing will bear no fruit.

However, the street style and individuality culture is a triangular hierarchy, consisting of various levels, with the radicals at the top and the mass consumers at the bottom. Just below the radicals sit the early adopters, who take influence from the radicals, but are also prepared to combine their passion for individuality with adherence to mainstream culture.

This group, the early adopters, is the key target for the mass customisation model. It is the early adopters that will relish the prospect of being offered choices that take their desire for individuality into account.

They divide their loyalties between grassroots radicals (with whom they seek to identify) and brands they feel support and reflect their desires for individuality. Whilst brands watch the radicals closely, the early adopters watch the brands as well. This is a group which, unlike the true radical, is active on social media, driven by ego, and seeking a large following.

They are a marketer’s dream because of the unwitting user-generated brand content they create. It is they who will proudly display their customised purchases, championing customisation down the style hierarchy.

The cycle of street style to mass adoption persists, but it is fragmented, with street style itself becoming a many-headed hydra, made up of different interchangeable elements. Under the mass customisation model, those interchangeable elements can be pieced together from their fragmented parts with more accuracy, less wastage, and delivering more customer value than ever before.

Street style essentially drives custom product purchasing by encouraging people to make their own choices in what they consume. Street style is at the heart of a ‘power to the people’ philosophy, whereby big brands do not have the authority to dictate the products people want. Rather than, as The Jam once sang, ‘the public wants what the public gets’, street style, combined with custom product offering, reverses the status quo.

The abundance of choice is central to the mass consumption culture, which has been magnified by social media and digital culture. Further magnifying that choice by offering it in the form of customised goods is a future-proof solution to meeting customer need for individual choice in the products they purchase.